We have always wanted children, so as soon as we felt the time was right we began looking into the different options available to us as a female same sex couple.

IUI was the first option we explored but although it is more affordable and less intrusive than IVF, we wanted to opt for the option which would give us the best chance of success therefore we decided to try IVF.

We were recommended a few clinics by friends and family who had undergone treatment and to be honest we were a little shocked at how expensive treatment was. We had been saving up when we saw an ad for abc ivf and we decided to check it out. Everything seemed great so we booked in an Initial Consultation to find out more and we also had lots of questions we wanted to ask a  medical professional. We really didn’t go into it thinking we would start treatment as we thought we would need to save up some more before going ahead.

Fast forward to the day of the appointment, we both arrived at the Harley Street clinic excited to find out more. We both has scans and were talked though the treatment process and costs. The price ended up actually being what they advertise on their website and we already had that saved up, so we started to think it would be a waste of time waiting any longer. And that was it, we wanted to go for it so we went ahead and booked out Treatment Consultation that same day.

We had the initial appointment in October, booked our Treatment Consultation for December and started treatment in January 2020.

Obviously treatment for same sex couple is a little bit different as we had to have a few more blood tests and sort out the donor sperm, however we felt so supported with everything we had to do. The team made us feel so comfortable and happily answered all our questions. At each appointment the team checked in on us and not just how we’re getting on with the medication, but also how we’re feeling about it. They actually cared and that made our experience so much more personal.

During our first cycle, Sarah was monitored very regularly to check how the follicles are responding to treatment. The Consultant did inform us that the follicles were under developed so they tweaked the medication a bit, but we were advised that it is recommended we stop that cycle and take a short break before starting afresh. Although we were sad, of course, we were actually really glad to be given such honest advice. We decided that there wouldn’t be much point carrying on with a cycle we knew wasn’t likely to end in a successful pregnancy so we stopped. Another thing we were grateful for was that abc told us this information at the right time so that we didn’t to pay for the full cycle (just the medication and scans we’ve already had!) and I’m not sure how many clinics would do that, whereas abc had our best interests in mind, not profits.

We took February off to allow Sarah’s body to recover and went back to the clinic in March to start a fresh cycle. Little did we know that a national lockdown was coming and that we would be going through IVF treatment during a global pandemic! With that being said, the reality was actually a lot less scary than we had imagined.

The clinic worked so hard and did a fantastic job at making sure the clinic ran as close to ‘normal’ as possible and also making patients feel comfortable. The main difference was that we had to wear masks in the clinic and there were a few extra forms to fill in, but the most important thing for us was that we were still able to attend appointments together as a couple. For all this we are extremely grateful and thankful!

The treatment journey in itself was fairly straight forward. We found the waits involved in the IVF process the hardest, especially THE 2 week wait! The fact that we were in lockdown also didn’t help because we literally didn’t have much to do to take our minds off the result; longest two weeks of our lives.

When we finally received the call, we could tell straight away. The team couldn’t contain their excitement for us - we were pregnant! It was the most surreal experience. You hear so many stories about IVF not working, especially on the first completed cycle, so we were pleasantly surprised to say the least.

We were just so excited for everything that was to come; we were going to be parents and we couldn’t have done it without abc ivf.

Baby Harlow is now here, happy and healthy. Life has been a whirlwind since giving birth and adjusting to life with a newborn but we wouldn’t change it for the world. We are so grateful to have our own little family and I don’t think we’ll ever be able to thank abc enough. 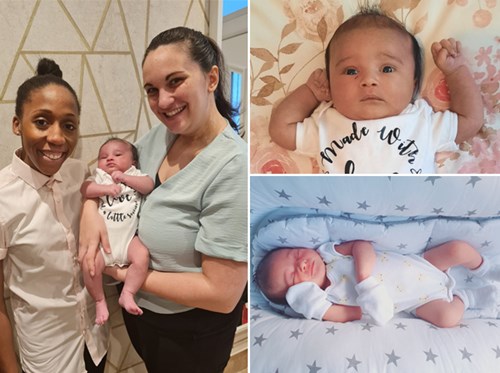 We have 2 embryos in storage so we’ll be back in the near future to try for a sibling. In the meantime, we’ll be recommending abc to everyone we know. THANK YOU!